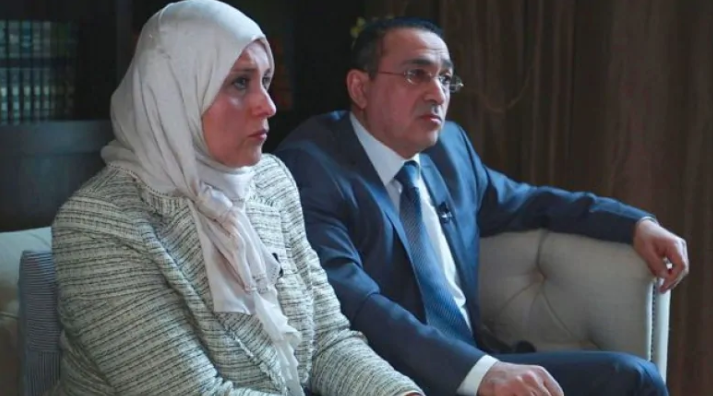 The parents of a Canadian man convicted of plotting ISIS attacks against busy New York City landmarks say their son was a mentally ill teenager and doesn’t deserve to spend the rest of his life in prison, however horrible his crimes.

Abdulrahman El Bahnasawy, 20, of Mississauga, Ont., pleaded guilty in October 2016 to conspiring with ISIS operatives in the failed plan to bomb Times Square and the city’s subway system.

At his sentencing hearing in federal court on April 9, U.S. prosecutors will argue for life in prison, but his parents are appealing for a lesser sentence and treatment for their son.

In an exclusive interview with CBC News and the Toronto Star, Khdiga Metwally and Osama El Bahnasawy say they realize the gravity of their son’s crimes.

But both say they firmly believe their son’s history of mental illness and drug addiction made him vulnerable to manipulation — first by ISIS recruiters, and then by the intelligence agents who were tracking him.

“We were struggling for this sick boy, and he [was] struggling for himself,” says Metwally, her voice shaking. “Other people try to manipulate him when he was so isolated on the internet, to do violence.”

El Bahnasawy had no criminal record and no history of violence, his parents say. Court documents report he was “radicalized mostly online by ISIS,” beginning about eight months before his arrest.

He had previously described himself as an atheist, his father says.

“He didn’t even know how to pray.”

In the fall of 2015, El Bahnasawy was 17 years old and living at home with his parents in a quiet suburban neighbourhood west of Toronto. He’d been kicked out of Grade 11 for acting out and, unbeknownst to his parents, started spending days at a time in ISIS chat rooms. Soon El Bahnasawy was in contact with a high-level ISIS recruiter and an undercover FBI agent posing as an ISIS agent.

At that time, El Bahnasawy had been diagnosed with bipolar disorder and had been in and out of drug rehab and mental health facilities five times, his parents say. He started complaining that the daily prescription drug regimen that had stabilized his moods was making him drowsy and causing him to gain weight.

“We tried to convince him, ‘Please, take the medications. It’s very important,'” his mother says.

When he refused, Metwally started putting the medication in his food, but he could taste it and would refuse to eat it, she says.

By early 2016, encouraged by ISIS to plan an attack, El Bahnasawy bought peroxide and other bomb-making materials online and shipped them to the undercover FBI agent in New York.

Court documents say in early May, El Bahnasawy told the undercover agent: “These Americans need an attack. I wanna create the next 9/11.”

The agent believed the attacks were planned for early June.

On May 21, 2016, when El Bahnasawy arrived in New Jersey on a road trip with his family, the FBI was waiting for him.

“When we reach the hotel in New Jersey, the FBI surrounded us in the parking lot and took my son from the car,” Osama El Bahnasawy says.

“They told us at that time that my son had been in the chat rooms supporting ISIS,” and they relayed the charges.

“We were shocked,” he says.

The parents say they have spent two years desperately trying to figure out how this could have happened. How their son could have planned bombings in the name of ISIS.

Both say they’re convinced his mental illness, which included diagnoses of bipolar disorder, obsessional traits and psychosis, left him vulnerable to manipulation. They question why authorities who knew of the plot didn’t intervene earlier to warn the family.

“They [the FBI and RCMP] knew my son was sick, and they continued,” Metwally says.

‘A dangerous and calculating man’

Neither the FBI nor the RCMP, which assisted the FBI investigation, would talk about the case, which is still before the courts.

The RCMP did know some of El Bahnasawy’s mental health history. Five days before the arrest, Toronto’s Centre for Addiction and Mental Health confirmed to the RCMP that El Bahnasawy had been an inpatient there for more than three months in 2014.

U.S. authorities say there is no direct evidence the FBI knew of El Bahnasawy’s medical history. And in any event, they argue, it’s a distraction with “no relevance to sentencing.”

“His mental health and drug addiction issues cannot and do not explain or excuse his conduct and shouldn’t be deemed mitigating circumstances,” U.S. prosecutor Geoffrey Berman wrote in the government’s sentencing memorandum.

“El Bahnasawy may be polite, soft-spoken, and articulate, but make no mistake — behind that veil is a dangerous and calculating man who displayed a knowing, willing and steadfast desire to kill in plotting the NYC attack.”

El Bahnasawy was assigned a public defender in New York and five months after his arrest he pleaded guilty to charges including conspiracy to use weapons of mass destruction, conspiracy to commit acts of terrorism transcending national boundaries and conspiracy to bomb a public place and public transportation system.

His case was sealed for 17 months while the FBI sought and arrested two other men associated with the plot, in Pakistan and the Philippines.

The team has submitted 19 letters to Judge Richard M. Berman from friends, family, medical professionals and Muslim leaders. The letters describe El Bahnasawy’s struggles with drugs and mental health, and characterize him as a non-violent but lonely and impetuous young man.

El Bahnasawy wrote a 24-page letter of his own to the judge earlier this month. He described his life, apologized for the plot and asked for “a second chance.”

He tried to assure the judge: “After a long transition in my thoughts … I can finally say I do not want to take the path of violence or war anymore.”

But the prosecution points to El Bahnasawy’s pattern of allegiance to ISIS. Five months after his arrest, for example, El Bahnasawy scrawled pro-ISIS messages referencing previous mass attacks on his cell walls.

“If he receives less than a life sentence, he is likely to leave prison and return to supporting the extremist and violent ideology espoused by ISIS,” wrote prosecutor Geoffrey Berman.

‘We ask for mercy’

Edney says his client wrote that “graffiti” a year and a half ago and should be judged based on what he’s doing today.

“Because he’s on his meds and doing well, he’s now working as a teacher in the prison, educating other prisoners,” the lawyer says.

He says he will ask the court for “maybe seven years” in prison for El Bahnasawy, a term U.S. prosecutors call “offensive to the people whom he sought to kill.”

Almost every week for nearly the past two years, El Bahnasawy’s parents have taken an overnight bus from either Toronto or Buffalo to visit their son in a New York jail.

Metwally says her son has “experienced [an] unbelievable sense of guilt” and with good treatment can be rehabilitated.

“We ask for mercy,” his father says.